Pelvic exams for everyone!

They used to call him “Keebs” but I always thought Simon was a pretty good comp too. 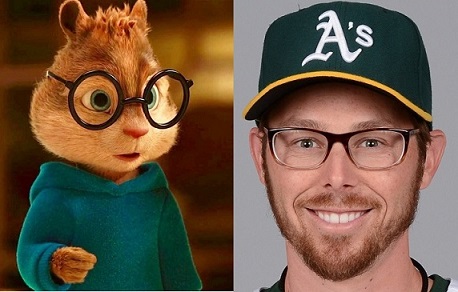 The Jays have a couple lefties in the bullpen but their starters are all righthanded:
Friday night: Aaron Brooks vs. Marcus Stroman
Saturday afternoon: Mike Fiers vs. Matt Shoemaker
Sunday afternoon: Brett Anderson vs. Aaron Sanchez

Ex-A’s report: in addition to Sogard; there’s just one more:

Billy McKinney: The A’s first-round choice in the 2013 draft went to the Cubs, along with their first-round choice in the 2012 draft, in the Samardzija/Hammel deal in 2014. After a lot of time in AA and AAA in the Cubs and Yankees systems he got a long look in the Jays outfield at the end of last season and has been their primary right fielder to open this season. He’s off to a bit of a slow start at the plate though, at .207/.281/.328.